As of January 1, 2023, predatory lending is outlawed in New Mexico and the maximum annual interest rate allowed on small loans is capped at 36%. (Loans of less than $500 may be subject to an additional one-time origination fee of 5%.)

Prosperity Works, one of our partner organizations in the New Mexicans for Fair Lending Coalition, has posted a helpful resource guide about where New Mexicans can access affordable lending options: click here to access that guide.

One of the best options for affordable short-term loans that are accessible to New Mexicans with poor or no credit are the state’s credit unions. This map by Prosperity Works shows the locations of credit unions in communities across New Mexico:

At the start of the session, a report from our friends at New Mexico Ethics Watch examined the powerful influence of the predatory lending industry, including its campaign contributions and its army of lobbyists.

House Bill 132 survived its two House committees on close votes of 3-2 and 7-5. Opponents attempted to kill the bill with a procedural maneuver on the House Floor, arguing that it lacked authorization from the governor and was therefore not permitted to be considered during the 30-day legislative session. Within hours, Governor Lujan Grisham added the bill to her legislative agenda, and it passed the House 51-18. (The House added a minor amendment, allowing a one-time origination fee of 5% on loans under $500, which we agreed to accept in order to keep the bill on track for passage.)

House Bill 132 made its way through its two Senate committees unanimously, and passed the Senate on a vote of 19-8. Governor Lujan Grisham signed the reform into law on March 1, 2022.

The 36% interest rate cap will take effect on January 1, 2023. Based on data from the state Regulation and Licensing Department, we estimate that this reform will save 240,000 low-income New Mexicans approximately $175 million a year.

Think New Mexico partnered with with the other members of the New Mexicans for Fair Lending Coalition and the Credit Union Association of New Mexico to advocate for the bill, and it received a big boost when Governor Lujan Grisham included it as one of her top priorities for the 2021 legislative session. With so many families across New Mexico facing financial distress as a result of the pandemic, this reform is urgently needed to prevent thousands of New Mexicans from becoming trapped into predatory loans and losing cars, losing homes, and not being able to put food on the table.

Senate Bill 66 passed two Senate committees and the full Senate on a vote of 25-14, marking the first time this reform has passed a chamber of the legislature since New Mexico repealed its usury laws four decades ago. Unfortunately, the bill was opposed by an army of powerful lobbyists for the predatory lending industry, and in its final House committee, the bill was amended to increase the interest rate cap to 99%. The bill passed the full House with that 99% cap in place for all loans under $1,100 (about two-thirds of all small loans in New Mexico). A majority of the Senate felt that a rate of 99% for loans under $1,100 was unconscionable, and since the House refused to reconsider, the chambers deadlocked and the bill died, meaning that residents of one of the poorest states in the nation will continue to pay some of the highest rates in the nation for small loans. 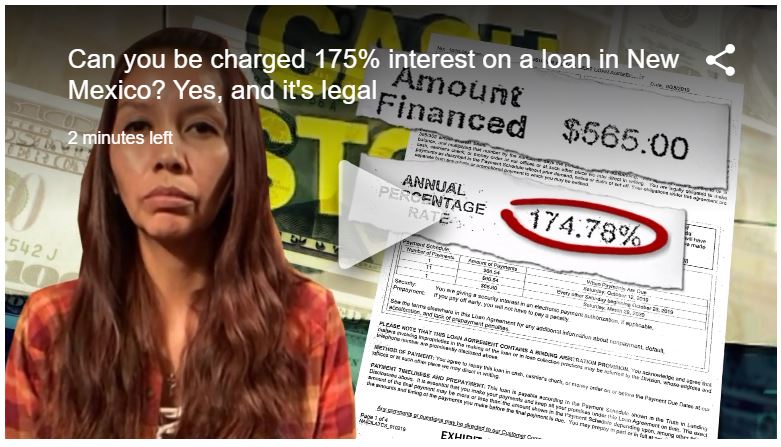 Think New Mexico will be back to advocate for the 36% interest rate cap during the 2022 legislative session.

New Mexico has long been plagued by predatory lending. The state has a small loan store for every 3,819 residents (by comparison, there is one McDonald’s restaurant for every 23,298 New Mexicans). Eighty-five percent of these predatory lenders are owned by out-of-state corporations. Their loans, which carry triple-digit annual interest rates, trap many New Mexicans in cycles of debt that are impossible to escape from. Four out of five supposedly short-term loans are refinanced or rolled over rather than paid off, and many New Mexicans end up taking out multiple loans to pay off an initial one.

Predatory lenders are drawn to states that allow high interest rates and have relatively lenient regulatory environments. The concentration of predatory lenders in New Mexico is due in large part to the fact that our state allows small loan companies to charge interest rates as high as 175% annually, one of the highest rates allowed in any state – five times higher than the national average.

Think New Mexico recommends that the legislature and governor bring New Mexico in line with most other states by cutting the state’s maximum annual interest rate on small loans from 175% to 36%.

This reform is consistent with the laws in a growing number of states. In just the last five years, Montana, South Dakota, and Virginia capped annual interest rates on small loans at 36%. In addition, in 2006, Congress passed the Military Lending Act, which capped the cost of credit provided to military families at 36%. This federal law already protects 17,741 active duty, national guard, and reserve members in New Mexico from high-interest predatory loans.

In order to not just protect New Mexicans from predatory lenders but also empower them with the tools to better their financial situations, Think New Mexico recommends making a course in financial literacy or personal finance a high school graduation requirement and adding it to the state’s education standards. Read more about this reform.

Read a column by Milan Simonich of the Santa Fe New Mexicans about the final passage of legislation to end predatory lending • February 17, 2022

Read an editorial from the Albuquerque Journal about Think New Mexico’s successful effort to add personal finance to the state’s education standards • February 18, 2022

Read an article from the Associated Press about Think New Mexico’s successful effort to add personal finance to the state’s education standards • February 16, 2022

Read an article from the Albuquerque Journal about the legislation to end predatory lending gaining momentum during the 2022 legislative session • February 9, 2022

Read an article from the Albuquerque Journal about Think New Mexico bringing back our legislation to end predatory lending • January 5, 2022

Read an editorial from the Santa Fe New Mexican about the need to make financial literacy a high school graduation requirement • October 22, 2021

Read an opinion editorial by Fred Nathan about the need to make financial literacy a high school graduation requirement • March 19, 2021

Read an opinion editorial by Kristina Fisher about the need to cap small loan interest rates at 36% • March 17, 2021