When high school dropouts were surveyed about why they left school instead of graduating, nearly half (47%) said a major reason was that they were bored and their classes were not interesting. Their top suggestion to help students stay in school was to make school more engaging and enhance the connection between the classroom and work. In other words, make the curriculum more relevant.

In addition, while most dropouts blamed themselves for failing to graduate, two-thirds of the survey respondents said that they “would have worked harder if more was demanded of them (higher academic standards, more studying and more homework).” Likewise, the Center for American Progress, a progressive think tank, undertook an audit in 2018 of all 50 states’ high school graduation requirements and concluded: “rigorous expectations for a high school diploma are a critical first step to preparing all students for success after graduation,” whether their path takes them to college or directly into a career.

In 2022, the state Public Education Department released a proposed redesign of New Mexico’s high school curriculum in June 2022. That plan diluted academic rigor by shifting courses in government, economics, and New Mexico history from graduation requirements to optional electives. It also rejected the idea of adding financial literacy/personal finance and civics, courses that have been shown to be engaging and relevant, to the high school graduation requirements. 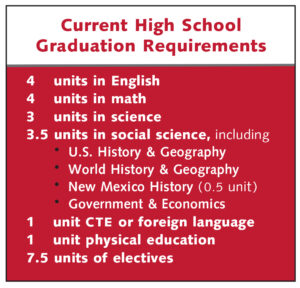 This proposal would take New Mexico in the opposite direction of a majority of states, which require relevant courses like financial literacy and civics.

Think New Mexico recommends that the legislature and governor add a one-semester course in personal finance to the high school graduation requirements. They should maintain the current requirement for a course in government and require that civics education be a part of that government course.

Rather than watering down the high school curriculum in New Mexico, the legislature and governor should bolster it.

Every state university other than Alabama’s requires two years of foreign language study. The study of foreign languages in an increasingly globalized world is important not only to be college ready but also to be career ready. The bipartisan think tank New American Economy found that approximately 60% of occupations with the highest demand for bilingual work do not require a college degree. 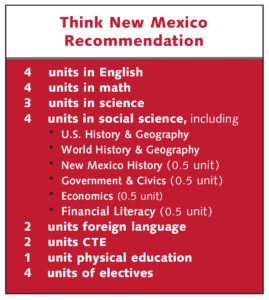 CTE (Career and Technical Education) is another area where students have been underserved and graduation requirements need to be strengthened. Empirical data in a report to Congress from the U.S. Department of Education that examined CTE and graduation rates found that that New Mexico high school students who take at least two CTE courses in a program area, such as film or health care, consistently graduated at rates above 90%—nearly 20% higher than the statewide average of 74%. However, only about 16% of New Mexico high school students currently complete more than one CTE course.

If required courses are added, then an equal number of courses must be subtracted in order to remain at the current 24 overall credits required for graduation. Interestingly, New Mexico is an outlier when it comes to the number of electives required for graduation. New Mexico currently requires students to complete seven and a half electives to graduate. Only one state, Florida, requires more, at eight electives. Nevada also requires seven and a half credits to graduate. The other 47 states require fewer credits than New Mexico, and 21 states do not require any electives. If three and a half required electives are subtracted from New Mexico’s current requirements, the total graduation requirements would remain constant at 24, but would be refocused on relevant and rigorous core subjects.

Read our guest editorial about why the state should maintain strong graduation requirements • July 24, 2022

This afternoon, our Education Reform Director Mandi Torrez provided public comment to the Legislative Education Study Committee about the need for rigorous & relevant graduation requirements that ensure students have the knowledge & skills they need for college & career.

Specifically, we recommend including a semester of financial literacy, two credits of world language, and two credits of career and technical education in the state's high school graduation requirements.

NM ranks 47th in the U.S. in financial literacy. A recent poll found 98% of New Mexicans think it is important or very important for students to learn personal finance. We must give students the education they need to budget, save, and avoid costly financial mistakes.

Under current law, students only need one credit of either a world language (language other than English) or one credit of career & technical education in order to graduation. Yet both subjects are vitally important for students' futures.

Did you know that 60% of jobs with the highest demand for bilingualism do not require a college degree? Did you know many top colleges (including UNM) require two credits of world language? In a globalized world, language skills are essential for both college and career.

A U.S. Department of Education found that NM students who take at least two career & technical education courses in one area graduate at rates above 90%. From health care to teaching, CTE is essential for student success and to build our future workforce. All students should take CTE. ... See MoreSee Less

❤️financial literacy ❤️ Thank you for your advocacy for our future!

Self-reliance should be Advocated in Every Family

Isn’t the legislative education committee headed by a racist?

Yet another scandal illustrating the serious problems with New Mexico's broken capital outlay process. Because funds are appropriated without any advance vetting or planning, taxpayer dollars are diverted to non-essential projects while real needs go unmet.
... See MoreSee Less

Turf wars: A tale of deception and misused tax dollars

That's why I vote no on these projects.

Kansas just became the 16th state to add a one-semester financial literacy class to its high school graduation requirements -- and 15 other states include financial literacy to be incorporated into another required course like economics. Time for New Mexico to join this rapidly growing movement!

"How many times have we seen or heard or friends and peers say they wish they would have learned what to do with their finances in high school? High school is the perfect time to learn about how a loan works, when and how to open a savings account, and possibly how to file a simple tax return.

How many of our friends have said they wished high school taught them more life skills like this instead of algebra?"
... See MoreSee Less

Mandi is New Mexico's 2020 Teacher of the Year. She has a decade of experience teaching third and fourth grade in the Bernalillo Public Schools, and she was also recognized as that district's 2019 Teacher of the Year. Mandi holds an undergraduate degree in Journalism and a Master's in Integrated Elementary and Special Education. Before becoming a teacher, she worked at the Farmington Daily Times as the News Editor and as Copy Editor.

Prior to joining Think New Mexico, Mandi served as Teacher Liaison at the New Mexico Public Education Department, and she has experience advocating at the state legislature as a New Mexico Senior Policy Fellow with Teach Plus New Mexico, a policy and leadership training network for teachers.

We are excited that Mandi will be leading Think New Mexico's major new effort to rethink New Mexico's public schools and lift up student performance and outcomes, particularly for the at-risk children who make up nearly three out of four students in our schools. ... See MoreSee Less