Although the food tax was repeatedly promoted on the Senate Floor, strong and consistent opposition from Governor Michelle Lujan Grisham, Speaker Brian Egolf, and the public prevented any of the bills from coming up for a hearing.

We are cautiously optimistic that the failure of this year’s food tax bills may indicate that legislators who have pushed for the food tax are beginning to realize that there is a good reason why 34 other states, including our neighbors in Arizona, Colorado, and Texas, do not tax food: it is simply bad public policy. 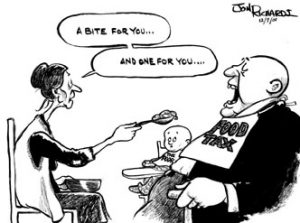 In late 2001, with the release of our fourth policy report, Think New Mexico launched a campaign to repeal New Mexico’s food tax.

At that time, New Mexico was one of only nine states that continued to fully tax food, along with Mississippi, Alabama, and West Virginia. This antiquated tax was extremely regressive, burdened working families, and worsened the state’s hunger problem.

Our bipartisan legislation to abolish the food tax came extremely close to passing in the 2002 legislative session, but ran out of time at the very end. In 2004, Think New Mexico teamed up with Governor Bill Richardson and House Speaker Ben Lujan to champion a successful bill to repeal the taxes on both groceries and selected medical services.

The 2010 Veto of the Food Tax Reimposition 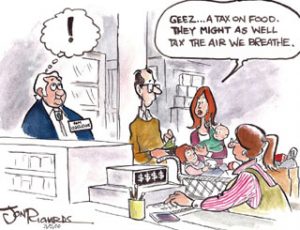 On March 24, 2010, Governor Richardson vetoed the reimposition of the food tax that had been approved during a special legislative session earlier that month.

The movement to reimpose the food tax emerged in late 2009 when the Greater Albuquerque Chamber of Commerce proposed it as an alternative to raising corporate or personal income taxes. Think New Mexico launched into action against this threat, which would have taken over $250 a year out of the pockets of the average family of four.

During the regular legislative session, a bill passed the Senate that would have taxed more than half of New Mexico’s staple foods (because the taxed foods included white flour tortillas, it was quickly dubbed the “tortilla tax”). Think New Mexico joined with other organizations to oppose the tortilla tax, and it was unanimously tabled in its first House committee. This chapter of the food tax saga came to an end when the Governor line-item vetoed the reimposition of the city and county portion of the food tax that was included in the tax package passed during the 2010 special session.

The Third Defeat of the Food Tax 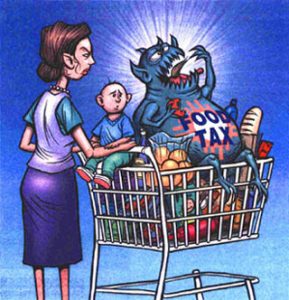 Late at night on the final evening before the 2013 legislative session concluded, the Senate Finance Committee unexpectedly passed a complex tax package that, among other things, would have reimposed the food tax on New Mexico families — an idea that had not been raised during the first 59 days of the 60-day session. Just as we had in 2010, Think New Mexico sprang into action to defeat it once more.

We alerted the media, our allies in the legislature, and our thousands of supporters across the state, who sent 1,120 emails to their legislators asking them to oppose the food tax in the final hours of the session. By the time the tax package came up for a full vote of the Senate less than an hour before the end of the session, we were relieved and gratified to find that the food tax was no longer included.

Although two prior attempts to reimpose the food tax were defeated, in October 2013 the New Mexico Municipal League, which represents the state’s mayors and city councils, announced that it would be bringing legislation to reimpose the food tax during the 2015 legislative session. The proposal was adopted as a high priority item by the Municipal League in August 2014 and draft legislation was presented to the legislature in December 2014.

In January 2015, Senate Bill 274 was introduced to reimpose the food tax. Think New Mexico worked hard to defeat it, and although it passed one Senate committee in a vote held without a public hearing, the bill was stopped before it reached the Senate. Once again, in 2016 legislation was introduced to reimpose the full food tax, and once again we successfully opposed it.

On December 15, 2016, the New Mexico Revenue Stabilization and Tax Committee considered legislation to reimpose the regressive food tax on New Mexico families (see coverage from KRQE News 13 and KOAT News 7). The food tax was presented as one piece of a much larger “tax reform” package aimed at raising revenue for the state. Yet the legislators pushing the food tax never answered one important question: how is it that 34 other states are able to balance their budgets without taxing food?

The tax reform package including the food tax was introduced as House Bill 412 during the 2017 session, along with several other bills that also proposed taxing food (Senate Bills 441, 416, and 496). We worked closely with a diverse coalition of other organizations to oppose these bills, and we were gratified when House Speaker Brian Egolf declared the food tax a “deal breaker” and the House voted unanimously to remove it from House Bill 412 before passing it. The Senate ultimately did not act on that bill, and none of the other food tax bills got any traction.

During the 2018 legislative session, Senator Cliff Pirtle introduced Senate Bill 129, which would have reimposed the food tax on all groceries other than meat, flour tortillas, and items eligible for WIC, the Women, Infants, and Children supplemental nutrition program.

We sent Senator Pirtle a letter (read it here) explaining how unworkable this would be. WIC excludes many locally produced foods, like goat cheese, chile powder, and all nuts, including New Mexico pecans and pistachios. Moreover, even for items that are potentially WIC-eligible, only specific brands and specific sizes of foods are included in the program.

Since this is likely not the last we’ll see of the food tax, we are continuing to work closely with our partner organizations to oppose future efforts to bring back the food tax.

Read articles from the Santa Fe New Mexican and Albuquerque Journal about legislation introduced during the 2019 legislative session to bring back the food tax • February 20, 2019

Read a column from Milan Simonich in the Santa Fe New Mexican about why the the food tax should stay “dead and buried” • December 23, 2018

Read an Albuquerque Journal article about the legislature rejecting a 2018 bill to reimpose the food tax • February 3, 2018

Read commentary by Algernon D’Ammassa on KRWG New Mexico about why we should “flush the food tax!” • December 27, 2016

Read Albuquerque Journal article on the proposed 2013 reimposition of the food tax • October 22, 2013

Watch Governor Richardson’s statement on his decision to veto the reimposition of the food tax.

Read editorials by the Carlsbad Current-Argus, the Edgewood Independent, the Las Cruces Sun-News, the Rio Grande Sun, and the Santa Fe New Mexican urging Governor Richardson to veto the reimposition of the food tax.

Read Deming Headlight editorial opposing the reimposition of the food tax (which also ran in the Carlsbad Current-Argus, the Las Cruces Sun-News, and the Silver City Sun-News • January 1, 2010

Read Santa Fe New Mexican article about how all five gubernatorial candidates oppose the reimposition of the food tax • December 22, 2009

Read the opinion editorial by Think New Mexico and the New Mexico Conference of Catholic Bishops opposing the reimposition of the food tax, which was published in 23 newspapers across the state, including the Albuquerque Journal, the Santa Fe New Mexican, and the Rio Grande Sun • December 2009 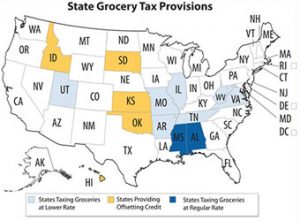 According to a 2012 report by the Tax Foundation and a 2017 report by the Center on Budget and Policy Priorities, very few states still fully tax the sale of food

Questions about how the food tax repeal affects you as a consumer or business? Check out the New Mexico Taxation & Revenue Department’s Fact Sheet on the Food Tax Deduction.

Patrick was a great ambassador for Think New Mexico, but more importantly a delightful person and a wonderful doctor, and a great husband to Stacy, and father to Brigid (former Think New Mexico intern) and Danny.

Sad that you post a picture of him masked, instead of the beautiful picture that is on his obituary. Please switch this. You have made him an anonymous face.

Patrick was a great ambassador for Think New Mexic

We are excited that former Think New Mexico Leader

New reduced prices on clothing in our Threadless s

Many thanks to all of you for the tremendous outpo

Thanks to your incredible outpouring of support ov