Legislation to create a Strategic River Reserve was initially introduced in the 2004 legislative session, where it was expanded to include groundwater and renamed the Strategic Water Reserve. This bill passed the state House 47-6, but ran out of time as it awaited a hearing on the Senate floor in the final hours of the session.

In 2005, Think New Mexico brought the legislation back with the unanimous endorsement of the Interim Water & Natural Resources Committee and the strong support of Governor Richardson, who called for it in his 2005 State of the State address. This time the Strategic Water Reserve legislation passed the House 58-9, the Senate 40-0, and received $2.8 million in initial funding.

In 2006, the Legislature and Governor appropriated an additional $2 million for the Reserve. Another $2 million was added in 2014, but unfortunately much of that funding was diverted to other state needs during the difficult budget year of 2017. Think New Mexico is continuing to work to ensure the continued funding and effective implementation of the Strategic Water Reserve throughout the state. Read our 2018 opinion editorial here.

For more information on the implementation and current status of the Strategic Water Reserve, please visit the New Mexico Interstate Stream Commission’s webpage dedicated to the initiative. 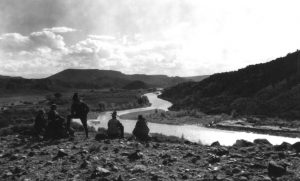 New Mexico’s rivers have always been the lifeblood of our state’s communities. Today those rivers are increasingly threatened by the colliding forces of drought, population growth, and the competing demands of the federal government and bordering states.

In late 2003, Think New Mexico launched a campaign to improve the state’s river management policies by creating a Strategic River Reserve: a pool of publicly held water rights dedicated to keeping New Mexico’s rivers flowing to meet the needs of river-dependent endangered species and fulfill our water delivery obligations to other states. 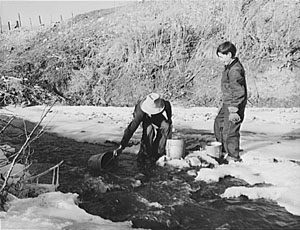 This Reserve will avert expensive lawsuits over endangered species and interstate river compacts. It will also protect and restore the many benefits flowing rivers provide to the state’s people and communities. Ultimately, it will give New Mexico a tool to achieve a sensible and sustainable water policy by balancing water use between cities, industry, agriculture, and our rivers.

Read an article from the Farmington Daily Times and an update from the Albuquerque Journal about the Jicarilla Apache Nation and the Nature Conservancy using the Strategic Water Reserve to put 20,000 acre-feet of water back in the San Juan River • November 20, 2020; January 21, 2022

"Financial literacy is key to a young person's future success," McKee said. “This legislation paves the way for our public high schools to provide young people with the skills they need to achieve their financial goals.”

In a 2018 study, only one-third of adults could answer at least four of five financial literacy questions on concepts such as mortgages, interest rates, inflation and risk, according to the Financial Industry Regulatory Authority's investor education foundation. Financial literacy was lower among people of color and younger people.

About 16% of 15-year-old U.S. students surveyed in 2018 did not reach the baseline level of financial literacy proficiency, according to the Organization for Economic Cooperation and Development.

But with some education, those numbers can improve, according to Urban’s studies.

“The findings are stark,” she said in a phone interview. “Credit scores go up and delinquency rates fall. If you are a student loan borrower, you shift to low interest from high, and you don’t rack up credit card debt, and you don’t use private loans, which are more expensive.” In addition, her research revealed that young people who have taken some financial literacy courses are less likely to use expensive payday loans.

Even the teachers who lead the courses tend to experience an uptick in savings."

Great editorial from the Albuquerque Journal on why New Mexico needs to make financial literacy a high school graduation requirement:

"Our push for financial literacy stems from the consequences of having a population low in this critical life skill, where poverty can be endemic and one in four residents is on food stamps and 43% of the state’s population is on Medicaid — the highest rates in the nation.

While we’re glad New Mexico has made strides, there’s clearly more to be done to keep our young people from sinking into a sea of debt and financial dependency."