After teacher quality, principal quality is the second most impactful factor in student success, and the two are closely connected: principals are the key to recruiting and keeping excellent teachers.

New Mexico ranks second highest in the nation for teacher attrition, with nearly a quarter of teachers leaving their positions in the year studied—nine points higher than the national average. The state’s high teacher attrition is likely linked to our high rate of principal attrition. A recent report by the New Teacher Center identified New Mexico as one of the ten worst states for principal retention, with principals staying an average of well un-der four years in a position.

When researchers investigated why principals leave their jobs, among the top reasons were inadequate preparation, insufficient professional development, and low salaries.

As with teachers, when it comes to building the skills of new principals, actual practice is more effective than academic study. Yet New Mexico’s current licensure process for principals is identical to that for all other types of administrators, like school district central office staff and finance managers. As a result, the coursework is heavy on concepts like school finance and law, but it falls short in terms of training future principals in skills like organizational management, how to fairly and accurately evaluate teaching quality, best approaches to improve the skills of their teachers, and understanding the special needs of at-risk students. 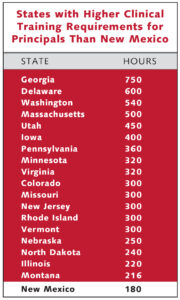 Prospective principals in New Mexico are only required to complete 180 hours of apprenticeship or internship before applying for the position—with six-hour school days, that’s only about a month of shadowing another principal before stepping into the job. Eighteen states, including some of the highest performing in the nation, have higher clinical experience requirements for principals than New Mexico, with 14 of them requiring at least 300 hours in field-based experiences.

Once a principal enters the profession, ongoing support is needed to help them keep developing their skills over time. Studies of principal coaching show that it makes a difference. For example, one study in Oakland found that principals who worked with coaches raised the academic performance index score of their schools by nearly three times the average districtwide increase.

Think New Mexico recommends that the legislature and governor expand access to professional development and coaching programs, and require that principals at all 864 public schools in the state participate in these programs.

Finally, principal salaries need to be adequate to compensate them for the time and work required to do the position well. Unfortunately, some principal salaries are actually lower than those of Level 3 teachers who hold multiple endorsements and national board certification, even though principals’ annual contracts are about 30% longer than those of teachers, averaging 250 days compared with 190 days for teachers.

Moreover, according to the most recently available data from the Public Education Department, as of 2018, principals in districts larger than 2,500 students are paid nearly $20,000 less than administrative associates in those school districts’ central offices, despite the fact that a principal has a far more profound impact on the lives of students. This salary imbalance incentivizes great teachers and principals to leave their schools and become central office administrators.

We recommend that the legislature and governor increase the minimum principal salaries to at least 30% higher than Level 3 teachers, reflecting the difference in workload—and they should also cap the salaries of central office administrators (other than the superintendent and perhaps one or two other top district staff) at no higher than the average principal in that district.

Right-sizing principal salaries and providing them with the preparation and support they need to succeed in their roles should improve principal performance and reduce principal attrition, which in turn should reduce teacher turnover and raise student achievement.

This afternoon, our Education Reform Director Mandi Torrez provided public comment to the Legislative Education Study Committee about the need for rigorous & relevant graduation requirements that ensure students have the knowledge & skills they need for college & career.

Specifically, we recommend including a semester of financial literacy, two credits of world language, and two credits of career and technical education in the state's high school graduation requirements.

NM ranks 47th in the U.S. in financial literacy. A recent poll found 98% of New Mexicans think it is important or very important for students to learn personal finance. We must give students the education they need to budget, save, and avoid costly financial mistakes.

Under current law, students only need one credit of either a world language (language other than English) or one credit of career & technical education in order to graduation. Yet both subjects are vitally important for students' futures.

Did you know that 60% of jobs with the highest demand for bilingualism do not require a college degree? Did you know many top colleges (including UNM) require two credits of world language? In a globalized world, language skills are essential for both college and career.

A U.S. Department of Education found that NM students who take at least two career & technical education courses in one area graduate at rates above 90%. From health care to teaching, CTE is essential for student success and to build our future workforce. All students should take CTE. ... See MoreSee Less

❤️financial literacy ❤️ Thank you for your advocacy for our future!

Self-reliance should be Advocated in Every Family

Isn’t the legislative education committee headed by a racist?

Yet another scandal illustrating the serious problems with New Mexico's broken capital outlay process. Because funds are appropriated without any advance vetting or planning, taxpayer dollars are diverted to non-essential projects while real needs go unmet.
... See MoreSee Less

Turf wars: A tale of deception and misused tax dollars

That's why I vote no on these projects.

Kansas just became the 16th state to add a one-semester financial literacy class to its high school graduation requirements -- and 15 other states include financial literacy to be incorporated into another required course like economics. Time for New Mexico to join this rapidly growing movement!

"How many times have we seen or heard or friends and peers say they wish they would have learned what to do with their finances in high school? High school is the perfect time to learn about how a loan works, when and how to open a savings account, and possibly how to file a simple tax return.

How many of our friends have said they wished high school taught them more life skills like this instead of algebra?"
... See MoreSee Less

Mandi is New Mexico's 2020 Teacher of the Year. She has a decade of experience teaching third and fourth grade in the Bernalillo Public Schools, and she was also recognized as that district's 2019 Teacher of the Year. Mandi holds an undergraduate degree in Journalism and a Master's in Integrated Elementary and Special Education. Before becoming a teacher, she worked at the Farmington Daily Times as the News Editor and as Copy Editor.

Prior to joining Think New Mexico, Mandi served as Teacher Liaison at the New Mexico Public Education Department, and she has experience advocating at the state legislature as a New Mexico Senior Policy Fellow with Teach Plus New Mexico, a policy and leadership training network for teachers.

We are excited that Mandi will be leading Think New Mexico's major new effort to rethink New Mexico's public schools and lift up student performance and outcomes, particularly for the at-risk children who make up nearly three out of four students in our schools. ... See MoreSee Less