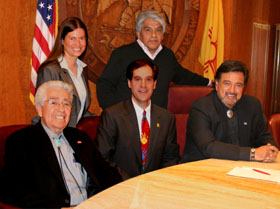 Working with many other stakeholders, in the 2009 legislative session Think New Mexico drafted and Speaker Ben Lujan sponsored a package of reforms designed to make title insurance more affordable for New Mexico families.

The reform package included four major elements. First, rather than having the Superintendent of Insurance set a single rate for title insurance in New Mexico, the Superintendent would instead set a maximum rate and allow price competition underneath it. Second, the discounts available for homeowners who refinance their mortgages would be substantially increased. Third, the bill enhanced a number of consumer protections. Finally, the legislation included a first in the nation provision designed to reduce the cost of title insurance for New Mexico’s Indian nations, tribes, and pueblos when they buy land and transfer it to the federal government to be held in trust. (Read a summary of the final legislation.)

Think New Mexico’s title insurance reform legislation passed the New Mexico House 59-0, the Senate 39-0, and was signed into law by the Governor on April 3, 2009.

Title insurance is intended to provide a guarantee to buyers that the seller is giving them good title to the property – in other words, that the seller is truly the owner of the property, and that there are no other claims against the property such as mortgages, liens, building restrictions, or other encumbrances. Title insurance is required by banks before they will approve or refinance a mortgage, and it is one of the largest elements of closing costs.

In 2007, Think New Mexico launched an effort to reform New Mexico’s title insurance laws. We proposed three related reforms that would benefit consumers: first, allow the free market, instead of the government, to set the price of title insurance. Second, encourage lenders to leverage their market clout and purchase title insurance policies on behalf of their consumers. Finally, end the title insurers’ immunity from negligence liability. These reforms would save New Mexico homebuyers approximately $40 million annually.

Read Santa Fe New Mexican article about Think New Mexico’s fight for refunds for homeowners who refinanced after May 1, 2009 and failed to receive the full discount on their title insurance policies • November 13, 2012

Watch a KRQE News 13 story about Think New Mexico’s fight for refunds for New Mexico homeowners who were overcharged for title insurance policies when they refinanced their mortgages • November 14, 2012 (2:27)

Did you refinance a mortgage between May 1, 2009 and July 31, 2014? You may be due a refund! To determine whether you qualify for a partial refund of your title insurance costs:

(2) If you received a lower discount than you should have, the title company should issue you a refund of your overpayment.

(3) If you experience any difficulties, contact the New Mexico Insurance Division. The Title Insurance Bureau can be reached at (505) 827-4536.