House Bill 77 proposed to limit the growth of school district central administrative spending to no faster than the Consumer Price Index (CPI) or the overall growth in the state education budget, whichever is lower. Classroom spending would not be limited. So in years like 2019, when lawmakers increased education spending by about 16% and the CPI is about 2%, central administration would be limited to 2% growth. All the rest of the new money would go to the classroom, where the learning takes place.

The Albuquerque Journal published an excellent editorial highlighting how the bill would help improve education in New Mexico. The Las Cruces Sun-News also published an editorial in support of House Bill 77, which ran in the Carlsbad Current-Argus and the Silver City Sun-News as well.

Although House Bill 77 did not pass, similar provisions were included in the state budget to maximize the amount of the 2019-2020 education budget that actually reaches students and teachers in the classroom, rather than going to central administration.

These budget provisions were also included in the 2020-2021 budget, in an even stronger form.

The profound importance of maximizing dollars to the classroom was highlighted by teachers from across New Mexico who came to the capitol during the 2019 legislative session to share their hopes and concerns with the House and Senate Education Committees, including their support for House Bill 77:

When Think New Mexico studied how New Mexico’s education dollars have been spent over the past decade, we discovered that between 2006-2007 and 2016-2017, more than two-thirds of school districts across New Mexico (61 of 89) grew their central office administrative spending faster than their classroom spending. (Read Think New Mexico’s full news release, and download the explanatory memo, classroom and administrative spending growth rates for school districts, for charter schools, and statewide. Please email us if you would like the full Excel sheet of all data). 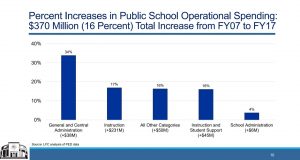 As this chart from the legislature’s finance staff shows, school district general and central administration grew by 34% over the past decade, more than twice as fast as all classroom spending, which increased by 16% during the same time period. Meanwhile, the funds allocated to principals’ offices increased less than 4% over the past decade, even though principals have a far more significant impact on student outcomes than central office administrators.

Think New Mexico will continue working to make sure that the state’s education budget maximizes dollars to the classroom not only in the 2019-2020 budget year, but every year going forward.

New Mexico’s public schools present a riddle: why have our student outcomes remained stuck at the bottom of the nation even as our education spending has increased? Between 1993 and 2014, New Mexico rose from 44th in the nation to 36th in the nation for total annual spending per student, according to the National Center for Education Statistics. In 2017, the National Education Association, which represents teachers, ranked New Mexico second in the nation for spending on education per every $1,000 of personal income. Yet our graduation rates and math and reading scores continue to lag behind states that spend less per student.

More evidence for this connection can be found in New Mexico’s highest performing school districts. Along with achieving high graduation rates and math and reading scores, these districts tend to spend a larger percentage of their budgets on classroom expenses, such as teachers, coaches, counselors, nurses, educational assistants, and school supplies, rather than on administrative expenses in the central district office.

Since about 90% of New Mexico’s operational education budget consists of state taxpayer dollars, the legislature and governor have the responsibility to ensure that the money is spent as effectively as possible.

Based on the examples of the state’s most successful districts, in 2017 Think New Mexico launched a new initiative recommending that the legislature and governor establish minimum percentages of each school district’s (and charter school’s) budget that must be spent in the classroom, rather than on administrative expenses. The minimum percentages would vary based on district size, as larger districts with better economies of scale should be able to spend a higher proportion of their budgets in the classroom. In addition, “classroom spending” would be broadly defined to include not only instruction, instructional support (e.g., librarians), and student support (e.g., counselors, nurses), but also principals, since the research suggests that principals can have a powerful positive impact on student achievement.

If New Mexico were able to shift just 4% of its $2.7 billion from administration to the classroom, it would mean an increase of over $100 million for proven education reforms, from K-3 Plus to prekindergarten to better pay for principals and teachers.

A bipartisan team of legislators, including five educators and the Democratic Chair and ranking Republican on the House Appropriations and Finance Committee, introduced House Bill 180 to move more than $100 million a year from school district central administrative offices to New Mexico’s classrooms. Moving these dollars to the classroom would make more money available for critical needs like addressing the statewide teacher shortage and expanding access to proven programs like early childhood education and K-3 Plus.

The bill proposed ambitious but achievable targets for school districts and charter schools to maximize the percentage of their budgets that they are spending in the classroom. The targets were voluntary, and the bill proposed to help school districts and charter schools meet them by reducing unnecessary administrative paperwork.

Although the bill unfortunately did not pass during the 2018 legislative session, Think New Mexico continues to believe that more dollars in the classroom are urgently needed (as do the teachers who testified in favor of the bill and the hundreds of New Mexicans who wrote to their legislators asking them to support it). We worked throughout 2018 to revise our legislation and bring it back during the 2019 legislative session.

Read an editorial by the Albuquerque Journal about the need to maximize dollars to the classroom • February 20, 2019

Read a opinion editorial by Executive Director Fred Nathan about the need to limit administrative spending and send more dollars to the classroom • January 27, 2019

Read a Las Cruces Sun-News editorial about the benefits of House Bill 77 • January 11, 2019

Read an opinion editorial by Executive Director Fred Nathan about how the Yazzie decision makes it clear that New Mexico must spend more in the classroom • August 13, 2018

We are glad to see Think New Mexico’s founding board president Stewart Udall’s legacy continue to be recognized and celebrated! ... See MoreSee Less

“The Land of Enchantment holds no allure for retirees, condemning it to the very bottom of the list this year.

Social Security, retirement account distributions and pension payouts all get taxed here, and while lower-income seniors can catch a bit of a break, sales taxes are also above average. Don't move here without ditching any high-interest debt you're carrying, because it will only get harder to make your monthly payments.” ... See MoreSee Less

The results are in: These are the worst states for retirement in 2021

Is that photo supposed to have been taken in New Mexico?

"Legislation doesn’t necessarily mean it’s a done deal. For instance, New Mexico’s bill that requires students to take a financial literacy course to graduate high school passed the state’s House of Representatives but was never brought to a final vote in the Senate.

One of the bill’s primary sponsors, State Rep. Antonio "Moe" Maestas, is hopeful that it will be passed in the next year or two as part of an overhaul of the state’s education curriculum.

“A lot of our educational institutions are kind of stuck in the 1950s,” he said. “We need to update what students are learning to succeed in complex twenty-first century society.” ... See MoreSee Less