During the 2021 legislative session, five different bills were introduced to repeal the state’s tax on Social Security income during this year’s legislative session: House Bill 19, House Bill 49, Senate Bill 78, Senate Bill 162, and Senate Bill 208. The bills had both Democratic and Republican sponsors, and took various approaches, from a straight repeal to a repeal targeted toward lower and middle income New Mexicans, and from a repeal that did not raise other taxes to a revenue-neutral version that made up for the reduction in state revenue.

In the past decade, eight of the 13 states that tax Social Security benefits have significantly reduced their taxes, leaving New Mexico with one of the heaviest taxes on Social Security benefits in the nation. The tax is especially burdensome for the 55,000 grandparents who are struggling to pay for their retirement while serving as the primary guardians of their grandchildren.

The House bills introduced during the 2021 session were unfortunately killed in their first or second committees. None of the Senate bills were scheduled for a single committee hearing, but on the final day of the session, one senator proposed an amendment to an unrelated tax bill to add a repeal of the tax on Social Security. This resulted in the full Senate debating the issue for more than an hour. In the end, the amendment failed 16-22, but several senators who voted against it expressed their support for the idea if it were brought to the Senate Floor as a standalone bill. We look forward to working with these senators to pass a bill repealing the tax on Social Security income during the 2022 session.

During the 2021 session, Think New Mexico also supported House Bill 162 to require that every member of the Public Employees Retirement Association (PERA) board have skills, knowledge, and experience relevant to investment fund management.

The PERA board oversees a trust fund of around $17 billion for more than 90,000 public workers and retirees. Yet under current law, no member of the board is required to have any experience or expertise in financial or investment management. House Bill 162 proposed to change that by requiring every member of the PERA to have skills, knowledge, and experience relevant to investment fund management.

As the Santa Fe New Mexican has described, meetings of the current PERA board have often been “derailed by infighting” over issues like the quality of snacks being provided at the meeting, and lengthy debates over whether to approve the meeting agenda. (Video excerpts of board meetings illustrating the dysfunction are posted in the Issue Summary on this page.) The quality of a pension’s governance affects the fund’s performance: one study found that poor governance can cost pensions 1-2% annually, which means the current dysfunction on the PERA board could cost the fund over $150 million dollars a year.

Unfortunately, House Bill 162 was opposed by a group of activists who have successfully organized to elect their preferred, but largely unqualified, candidates to the board, and we were not able to overcome that opposition during the 2021 session. The crisis with PERA’s governance will only continue to grow, so we plan to keep working with key stakeholders in the coming months to prepare to win passage of legislation next year to revamp the PERA board and ensure that every board member is fully qualified.

During the 2020 legislative session, bills were introduced on all three of Think New Mexico’s recommendations for improving retirement security in New Mexico. 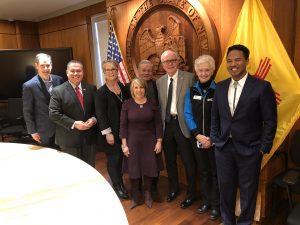 The New Mexico Work and Save Act (House Bill 44, sponsored by Rep. Tomas Salazar, Rep. Gail Armstrong, Rep. Christine Chandler, Sen. Bill Tallman & Sen. Michael Padilla) would create a system of Individual Retirement Accounts, similar to the state’s 529 college savings accounts, that would be available to workers who do not have access to retirement savings plans through their jobs. The research shows that people are 15 times more likely to save for retirement if they can do so using automatic deductions from their paychecks. Unfortunately, New Mexico currently leads the nation in the percentage of workers who lack access to work-based retirement savings plans that they can contribute to using automatic payroll deductions. House Bill 44 passed the House on a vote of 62-1, the Senate on a vote of 40-0, and was signed into law by Governor Lujan Grisham!

House Bills 29 and 77 passed their first House committee unanimously, but were tabled (killed) in their second. The Senate bills never even came up for a hearing. Although we are disappointed by this outcome, we are not deterred. We were inspired by the massive public support for this reform – over 9,600 emails were sent to legislators and the governor on this issue during the 30-day session! – and we are continuing our fight to repeal it.

Increasing qualifications to for PERA pension board members (Senate Bill 201, Sen. George Munoz). Currently, no member of the PERA board, which oversees $15.8 billion for 90,000 public workers and retirees, is required to have any background in finance or investment management. The PERA board is completely dysfunctional, as was recently reported in the Santa Fe New Mexican, and research shows that poor governance can cost pensions 1-2% annually. SB 201 would restructure the PERA board in several ways, including adding qualifications for board members. Unfortunately, Senate Bill 201 never received a hearing during the 2020 session.

New Mexico is facing a looming retirement security crisis. Our state already ranks third highest in the nation for the percentage of seniors living in poverty (12.2%), according to the U.S. Census Bureau. This percentage will likely grow in the coming years, as two out of three private sector workers in the state have no money saved for retirement, and 80% have less than $10,000 saved. Meanwhile, the state’s public pensions are underfunded by a total of $12.5 billion, putting their long-term solvency in jeopardy.

In response to this crisis, in 2019, Think New Mexico launched a new initiative designed to enhance retirement security for all New Mexicans. This initiative proposed three major reforms that will put money back in the pockets of today’s retirees and ensure that more seniors in the future will have adequate savings to enjoy their retirement.

The New Mexico Work and Save Act, which is similar to reforms adopted by a growing number of states, would create a system of Individual Retirement Accounts funded by automatic payroll deductions that would be offered to workers whose employers do not already provide a retirement savings plan. These payroll deduction IRAs would be similar to 529 college savings plans, and would give small businesses a simple and inexpensive way to help their workers begin saving for retirement. (The New Mexico Work and Save Act is supported by State Treasurer Tim Eichenberg and AARP New Mexico, among others, as well as Think New Mexico.)

Finally, we recommend three reforms to improve the stability and performance of New Mexico’s public pension funds. These recommendations include using some of the state’s record budget surplus to make a one-time, $700 million cash infusion or bridge loan to the Public Employees Retirement Association (PERA); consolidating the investment management of PERA and Education Retirement Board (ERB) pension funds to achieve higher returns and lower fees; and (3) professionalizing the pension oversight boards by increasing the qualifications of those who serve on them (currently, no member of the PERA board, which oversees $15.7 billion, is required to have any experience or expertise in financial or investment management). All of these proposals are complementary with the reforms that have been recently recommended by Governor Michelle Lujan Grisham’s 2019 PERA Solvency Task Force.

To demonstrate the need for reforming the PERA board, here are a couple video excerpts of recent meetings. The first shows a discussion over the quality of snacks being provided at meetings; the second is a 12-minute excerpt of aa 40-minute argument over whether or not to approve the meeting agenda.

Think New Mexico will be advocating for these reforms during the 2020 legislative session. Sign up for our email alerts and follow our Facebook and Twitter pages to stay informed and get involved on this issue!

Read an Albuquerque Journal editorial in support of the New Mexico Work and Save Act to expand access to retirement savings for private sector workers in New Mexico • February 13, 2020

Read articles in the Albuquerque Journal and Santa Fe New Mexican about how the effort to repeal the tax on Social Security is gaining momentum • January 29, 2020

Read an opinion editorial by Fred Nathan and Kristina Fisher about the New Mexico Work and Save Act to expand access to retirement savings for private sector workers in New Mexico • January 26, 2020

Watch a KRWG-TV story about Dona Ana County urging the legislature and governor to repeal the tax on Social Security • December 12, 2019 (5:25)

Read an opinion editorial from retired state employees about the need to professionalize New Mexico’s PERA pension oversight board • January 3, 2020

Read an article about the dysfunction on New Mexico’s PERA pension oversight board • December 13, 2019

Watch a KRQE News 13 story about legislation to increase qualifications for members of New Mexico’s PERA pension oversight board • December 21, 2019 (1:51)