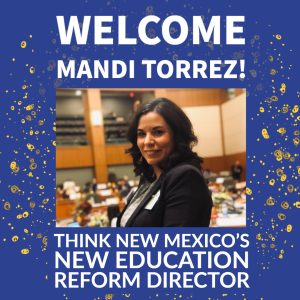 Mandi is New Mexico’s 2020 Teacher of the Year. She has a decade of experience teaching third and fourth grade in the Bernalillo Public Schools, and she was also recognized as that district’s 2019 Teacher of the Year. Mandi holds an undergraduate degree in Journalism and a Master’s in Integrated Elementary and Special Education. Before becoming a teacher, she worked at the Farmington Daily Times as the News Editor and as Copy Editor.

Prior to joining Think New Mexico, Mandi served as Teacher Liaison at the Public Education Department, and she has experience advocating at the state legislature as a New Mexico Senior Policy Fellow with Teach Plus, a policy and leadership training network for teachers.

We are excited that Mandi will be leading Think New Mexico’s major new effort to rethink New Mexico’s public schools and lift up student performance and outcomes, particularly for the at-risk children who make up nearly three out of four students in our schools. Read a recent Albuquerque Journal editorial about our proposed reforms.

This report, several years in the making, differs from Think New Mexico’s past policy initiatives, which have generally focused on a single core reform, like repealing the food tax or ending predatory lending.

The reason for this different approach is that the solutions needed to improve our public schools are interlinked. For example, New Mexico needs better prepared principals in order to recruit and retain good teachers, and highly effective teachers are essential in order for students to benefit from extra time for focused learning. While there are many good ideas for improving our schools, we searched for and highlighted those ideas that the evidence demonstrates can move the needle for student achievement—particularly for at-risk students—based on experience in New Mexico and elsewhere.

You can read the report and find out more details about our recommendations on the Education Reform section of this website.

If you like what you read and you’d like to be part of this effort to revitalize public schools in New Mexico, please contact your legislators and the governor and urge them to enact these reforms during the upcoming 2023 legislative session!

Thanks to you, we met the challenge! 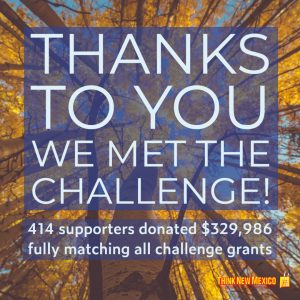 Including both the challenge grants and your matching contributions, during the online fundraising campaign between October 17-28, 2022 you helped us raise $329,986, which is more than 45% of Think New Mexico’s annual budget. We are especially pleased to welcome our 65 first-time supporters.

Since Think New Mexico was founded in 1999, we have always worked hard to keep our fundraising expenses to an absolute minimum. That’s why we have never employed a professional fundraiser. This strategy has succeeded thanks to all of you who give so generously during our two-week fund drive every year and make it possible for Think New Mexico’s small staff to focus on our policy research and advocacy work.

Find Out Where Your Candidates Stand on Think New Mexico’s Policy Reforms!

On November 8, every seat in the New Mexico State House of Representatives is up for election, as is the governorship.

As you make your decision about who you are going to support, we encourage you to find out where your candidates stand on Think New Mexico’s policy initiatives. Here’s how to do it:

1) Find out which New Mexico State House district you live in by entering your address on the New Mexico legislature’s website. (Note that due to the recent redistricting, your House district may have changed.)

2) Look up email addresses for the candidates running in your state House district and the gubernatorial candidates on our handy chart.

3) Send your candidate (and the candidates for governor!) a quick email asking where they stand on an issue or two that you are passionate about.

Here are some examples of questions you might ask:

If you get a response to your questions to candidates, please let us know!

This information is extremely helpful to us as we work to build coalitions in support of Think New Mexico’s policy reforms – and candidates are more likely to support these reforms if their voters are asking about them. Many thanks for your help!