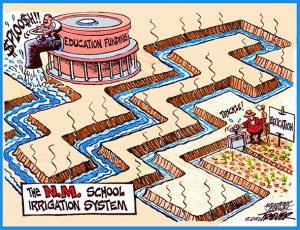 Great news: Walmart has apologized for imposing tax on food delivered to New Mexicans and will end this practice going forward.

"A Walmart spokesperson gave a statement to the Sun-News about the tax: “After receiving clarification from the state on the new tax exemption law, we are working to remove assessment of sales tax on eligible delivered food items. We apologize for the confusion.”

Walmart will be working toward reimbursing incorrectly charged customers as well, the company stated.

I wish the USDA would expand SNAP delivery options beyond this store in NM. Many stores and other options exist for delivery, but we are being kept to this one, unfortunate, option.

I am cautiously optimistic that, as reported in the press, Walmart through its brick-and-mortar stores will offer certain financial products and services to its low income, 'under-banked' customers which may complement Think New Mexico's well-researched agenda to limit predatory lending practices in this state; i.e. limit personal loan interest rates to 36%.

Fred Nathan, founder and executive director of the nonprofit policy think tank Think New Mexico, said his organization “completely agrees” about the need to improve the governance of the two pension funds.

“For example,” Nathan wrote in an email, “there is no statutory requirement that any member of the PERA [Public Employees Retirement Association] board have any background in finance and investments despite the fact that they are responsible for more than $17 billion of investments for more than 90,000 public workers and retirees. If the funds are mismanaged, it is New Mexico taxpayers who will pay the price.”

Think New Mexico unsuccessfully pushed for legislation earlier this year to change the composition of the PERA board and increase members’ qualifications.

Egolf said he was a “big supporter” of that proposal."

@walmart We were very disturbed to learn that you are still taxing delivered groceries in New Mexico even though that has been prohibited since July 1. We urge Secretary @stephanieschardin Clarke to crack down on this illegal practice!

Great editorial by the ABQjournal highlighting the need "to improve a process too often plagued by piecemeal funding, inadequate planning and flawed execution."

Good news/bad news: We understand the problem and might have a solution ~ but ~ New Mexico's public policy agenda is so hopelessly failed that we fear we may never achieve success in executing water/wastewater industry standard best management practices to improve the state's infrastructure woes. I'm a retired water utility supervisor with 27 years experience working at an investor-owned tap water company in a different state. During my working career, I used to advocate for the investor-owned utility business model juxtaposed with the public water utility business model arguing that 'privatized' water systems operated with greater efficiencies, yada, yada, yada. But the truth is, in my opinion, that investor-owned utilities are designed to make executives and shareholders wealthy; er excuse me, maximize reasonable returns on invested capital into 'plant'. One may draw one's own conclusion about the debate , but consider Pacific Gas & Electric, El Paso Electric and other investor-owned utilities business models and it is apparent that those businesses are constantly applying for ratepayer increases to invest into infrastructure but once those rate increases are approved, the money often disappears into executive salaries and perks. Maintenance is deferred, capital investment projects are delayed, employee salaries and benefits increase and soon, the regulated utility is applying for more ratepayer increases. During prolonged droughts, consumers are encouraged to conserve water. But conservation decreases revenue to cover the fixed costs of utility operations, so the utility returns to the state regulators asking for...more rate increases to cover the decreased revenue caused by consumer conservation. It's a wicked 'Catch 22' game, but the executives and investor shareholders always seem to win. I don't have a solution and I'm happy I don't have to play the game anymore, but there are resources that local and state governments can follow to help advance President Biden's 'Build Back Better' infrastructure improvement agenda in New Mexico. www.epa.gov/sustainable-water-infrastructure/effective-water-utility-management-practices, www.energy.gov/eere/femp/best-management-practice-1-water-management-planning, www.awwa.org, www.arup.com/expertise/industry/water. PS: I have no financial or business interest in posting this opinion.

Congratulations to Rhode Island, following New Hampshire, for making financial literacy a graduation requirement for high school students! Momentum continues to build, and it's time for New Mexico to step up and follow suit.

“Financial literacy is key to a young person’s future success,” said Governor Dan McKee. “This legislation paves the way for our public high schools to provide young people with the skills they need to achieve their financial goals. It will also help us ensure that every Rhode Island high school student is equipped with tools to prepare them for economic opportunity after graduation. ... See MoreSee Less